Louise Browne was born in Madison USA and began her dance career in New York musicals and TheZeigfeld Follies. She came to London in 1927 to star in The Girlfriend at the Gaiety Theatre. Married to the diplomat Keith Liversidge she moved to Norway in 1945 whilst in Oslo returned to full time training.

Louise together with Gerd Kjolass founded and directed the Norske Ballet which eventually became the Norske Opera Ballet.

Louise returned to London in 1950 and began her long and fruitful association with the RoyalAcademy of Dancing. She successfully ran the RAD Summer school and served on the dance panel of the Arts Council of Great Britain. In 1971 Louise was awarded the Queen Elizabeth II Coronation Award and in 1978 the Order of the British Empire for her services to Ballet.

Louise and her husband returned to York and in 1955 .

She established the York Scholarship Centre for the training of promising young dancers for entry to the major ballet schools. When the RAD closed its regional centres Louise Browne decided to keep the Yorkshire Region open herself.

With the help of colleagues and friends she established this unique Centre for dance excellence in the North of England giving talented dancers the experience of a professional class alongside other talented children. 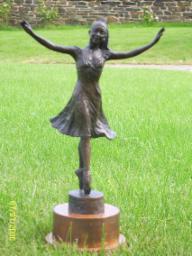 Sadly Louise passed away in 1996 at the age of 89. Louise placed emphasis on dancing to inspiring music, and now her inspiration lives on with her vision that continues to help talented children achieve their dream of dancing.